Interview of the Chairman of the Judo European Union)

In l'Esprit du Judo n°44 we had the occasion to ask Sergey Soloveychik questions about him, his career, judo and what his plan for the future were. Now, you can read it in english.

Impeccable suit, piercing eyes, perfect English ... Sergey Soloveychik, President of the European Judo Union and Chairman of Russian judo, close to Vladimir Putin, has become key figure in the judo world, and perhaps, even if he denies it, the future President of theInternational Judo Federation when Marius Vizer decides to step down. Straight talking - not politically correct. By Olivier Remy in Budapest

What is your opinion about judo today given the changes that taken place since the OG?
The first thing I have to say is that I am very proud of what the European fighters managed to do in London. We have to continue this path and not move on to something else too quickly: for the first time, I think, Europe showed its power by winning 29 medals out of 56. It is the logical result of all the hard work over the last years in Europe to get the fighters in the best condition.

What does that mean?
The sports development policy of the EJU put training camps in place, of a number and quality as never before. We had to give our support so that the athletes were in good position in the world ranking list and to respond positively to the federations who asked us to help them with their young talent. We also had to pay attention to the referees, help them train themselves and give the fighters clear advice during training camps. All of that was important in the preparation for the OG. taht was our goal and I think we suceeded. Of course there is competition between all the countries, but the challenge, at our level, is to make sure Europe is competitive.

Why is it important for Europe to bring back medals?
Because it has a financial impact on countries that look for sponsors or ask for financial support…Is also has an impact on each one of them and on the nations. Being strong is being financially and politicaly supported. Such support will improve our chances against Asia and Panamerica, and not giving them the chance to be better supported than us.

What are your plans for the future of European judo?
We need to reinforce our dynamic and, as on the mat, give as few opportunities as possible to our opponent. To succeed we are going continue with the OTCs, the training camps for the OG. We will also rely on a new committee of coaches that will work, which was never the case before, with the arbitration panel to create exchange and understanding on both sides. We also have just set up a committee of experts which includes Neil Adams, Hiroshi Katanishi, Jane Bridge, Jean-Pierre Gibert, Patrick Roux, Okano and others.

Is it important for you to bring experts - the judo technicians - together?
It is essential if we are to provide the means to progress technically, and get answers on the evolution of judo. They will be asked to intervene in the training, to meet other coaches in seminars. We have already experienced this with Jean-Pierre Gibert in Russia, including in my own club and I could see the importance of sharing with these high-level experts. Judo must not be “confiscated”. It is very important to pool our skills - and to allow the technicians to bring their expert assessment and experience. They have the legitimacy to speak. I have my ideas, but I'm not an expert.

You want to bring people together, with what goal?
I want to spread judo; the top-level is not all there is in judo. The top-level is a clear concern, but to ignore the whole pyramid would be a big mistake. In Russia, for example, there is a huge gap between the fighters in the national team and the clubs. We must ensure that the expertise of the first benefits to latter, especially in terms of knowledge transfer between teachers and between teachers and students. Teaching - explaining the techniques ... that cannot be invented. Judo is rich and that wealthmust be used. We launched a major program for judo in schools with the same idea.

Which means?
We underestimate ourselves. Our job is to make sure that through European-wide programs, judo is systematically and permanently established in school curricula. Some national federations, such as France, have experience in this field. Some countries also do it, at a regional level. But there is a lack of guidelines that would allow us to be stronger, clearer, more listened to, by capitalizing on the different experiences to drive major project in which clubs would feel involved. It is a dream, but a doable one. In a year’s time, there will be a conference of European Ministers of Education and Sport. Judo will be on the agenda. On practice. we have things to say. But, more than others, judo has educational values that must be put forward. I think we will have Vladimir Putin’s support, he follows everything very closely. We must be ready to present our project. It’s an opportunity we can’t miss.

What does Russia want of judo in terms of values? Do you subscribe to the logic of traditional judo, Kano’s one?
I cannot speak on behalf of all Russians, but I will give you my opinion. Judo is Japanese and part of the culture of that country, but as football, born in Britain, is not British, judo itself became international with the values it carries. Kano was a genius, someone very special who created judo with a moral code and ukemi, the two things that differentiate us from others. Ukemi is learning how to fall, but it’s much more than that. it is incredible power in symbolic terms, a guide to the life of a man: falling is being able to get back up again. How Kano was able to move into modernity is remarkable: when I see the relation Vladimir Putin has with his first teacher, Anatoly Rakhlin, his sensei which we know he has a very special character but carries values in which Mr Putin recognises himself, I think that only judo allows this and that it carries important lessons for young people

How do you explain the very technical judo demonstrated by the Russians ?
I thought the rule change with the prohibition of direct input to the legs and cross guards would be a problem for the Russians. But Ezio Gamba made me understand it was not the case. Ten years ago, the technique was bad, our judo less elegant, but it has progressed. Coaches have understood and found the path for each athlete. Basically, new rules or not, the question was to ensure that talent was expressed. This is Gamba’s talent and we are very pleased to have him with us. His understanding of situations, human relationships and character makes him someone special. He allowed the best to express themselves but also to the numbers 2,3 and 4 that trust him and that he has helped them express their talent. For a coach like him, training an Olympic team, it's almost easy. However, helping a bigger group to progress, is more difficult. Yet, it is what he’s doing in Russia. Russia without Gamba? Something would be missing.

What do you think of the new rules?
There are a number of good points but transition is not easy for the coaches and fighters, which I understand.

Are some rules going the wrong way?
We decided to experiment with these new rules until the Rio world championship before drawing any conclusions. From outside, I think it makes judo more attractive. As a judoka I think its a shame we can’t use some moves anymore. Finally, what we must not forget is the difficulty for fighters and coaches in their preparation. But the performance starts here. It is not always from this point of view that the referees applied the changes. It must be different. This is why arbitration boards and coaches will work together. There should not be a diktat of arbitration that says "It's like that! ". Ccoaches have their word to say and the referees will hear their voices as often as necessary. If we talk about preparing at high level, this means that we have to work together. I will pay attention to that. Things must be clear: rules must not be an impediment for us to bring back Olympic medals.

Will you be the next president of the International Federation?
I am really lucky because I have been working with Marius Vizer for years now. We know each other very well. He was vice-president of the EUJ when I was chairman of the Moscow federation. He has a special character but he sincerely loves judo and it’s easy to work with him. He has a very broad vision of the different issues that go beyond judo.

But you are ambitious and becoming chairman of the IJF would make sense, right?
There is nothing to say about this. I’m in the right place, so is Marius Vizer. There is no ambiguity. And today, Europe moves forward with competent people who work for judo. I’m not sure it would be as interesting anywhere else. I don’t mean to hurt anyone but in some countries I’m not sure they really are interested in judo.

You could also rely on your experience and on the European model that you are trying to develop ...
Yes, but we invite all Asian representatives or from elsewhere, with whom I am willing to share knowledge and experience, so I do not see myself anywhere else to put it in place. My family it’s here.

We are talking about Asia. What do you think about the situation in Japan?
It’s sad. My analysis is that the current chairmen are too conservative. I had a chat with Haruki Uemura and told him: in today’s modern society, you can’t be conservative whilst being responsible for the development of judo in your country that represents so much at a global level. Your governance is that of the time of the samurai, but today’s children are not those of centuries ago. They must change direction. I’m going to tell you a story: not so long ago I was in a Japanese sauna. I was talking with a young man, he was about to get married. I asked him if he wanted children. He said yes, I would like to have a son. I asked whether he would make him do sport and which one. His answer “Baseball of course!”. Why not judo? He told me that this samurai sport was too strict and that children needed to have fun. I then asked him if he wouldn’t like to have a straight and serious son. “Of course it’s what I want”. At no time he has been aware, and he has access to information, of what judo represents in the country in which was he was born. Judo has become a universal good and can not leave its image in this state. Punishments, children’s death and the crisis, all of this only gives a negative impression. You need to be lucid and smart. We are ready to help the Japanese with our experience. They must also realise they probably need us more than we need them - because we know how to show the educational values of judo.

Finally what would be your dream for judo?
That judo will be everywhere, that people see more and more judo. It goes through developing programs to boost our communication strategy. If we have the right strategy, judo will become important. We could go and see the sponsors, but for me, we must come with dynamic ideas and convincing programs.

By Olivier Remy in Budapest 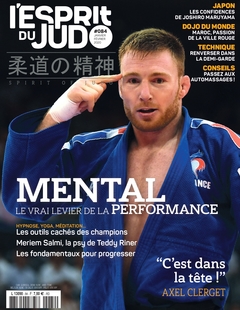